While London struggles with a housing and rental crisis, opposition to neighbourhood intensification grows. A look at Richard Florida’s latest research as it applies to London’s intensification strategy.

A decade ago, London faced a problem that was extremely common at the time. Growth around the edges of the city pulled people, businesses and revenue out of the downtown. Most of the activity was around the edges in newer subdivisions, largely based around big box stores. Making downtown a desirable place to visit and do business was a difficult and complex undertaking.

Urban activists, businesses, councilors, city employees, tech associations, colleges, universities, non-profits and volunteers worked to achieve that vision. It was a large collaborative effort on the part of many stakeholders. Many of the concepts and solutions centred around research done by a University of Toronto professor named Richard Florida.

Florida’s theory was that cities could revitalize themselves by attracting workers in what he called the creative class. The creative class includes a range of disciplines including science, engineering, programming, research, art and graphic design. Over the fifteen years since he published his theories, the world has seen growth in those areas.

Many cities in Canada, the US and elsewhere embraced Richard Florida’s ideas and flourished. London, like many other cities, has become a victim of its success. Below is an excellent interview with Steve Paikin on The Agenda.

About sixteen minutes into the above video, Richard Florida clarifies his view on NIMBYism and what he refers to as New Urban Luddism. It’s a great interview but if you choose not to watch it, here is a rather long quote.

What people do is, if they have a good quality of life, right, if I live in a lovely neighbourhood with single family homes or low-rise buildings, I don’t want a new high-rise tower because it’s going to ruin my neighbourhood character. It’s a big thing: “about neighbourhood character”. Well, in my book I say that’s not only NIMBYism, and it may be well-intentioned. If the source of economic productivity, of innovation, of economic growth, of job generation is strong clustered dense affordable cities, holding back the housing development we need through NIMBY behaviour, onerous old-school land use restriction building codes. I call them the “New Urban Luddites”. People like this term because, like the Luddites were very concerned that the new factories and machines in England would cost them their jobs, and smashed the machines, in a way NIMBY behaviour kind of destroys the clustering or limits the clustering we need to scale our cities and become more innovative.

Toronto’s problems are now playing out throughout the region, with London seeing skyrocketing real estate prices while the rental market dries up. People are spending ever-increasing amounts of their income on housing, if they can find any at all.  This is another broadcast from The Agenda that also discusses the disappearing middle-class, the impact of race and the consequences of alienation. As stated by David Hulchanski from the University of Toronto, “we’ve done this to ourselves.”

The latest public outrage is against building a low-rise medium-density 142 unit four-story apartment building. The house on the property was torn down in 2015. The plan was originally for six stories but was reduced to just four after complaints from neighbourhood residents. Apparently, this is inadequate for many of the residents. The planned town hall meeting has been moved to Wolf Performance Hall, a debate and lecture hall downtown that can accommodate more people.

“It does not belong there. Stoneybrook Heights is nothing but single family residences.”

The statement from Gloria McGinn-McTeer, spokesperson for the Stoneybrook Heights-Uplands residents’ association: “It does not belong there. Stoneybrook Heights is nothing but single family residences.” The message to residents of the apartment: you don’t belong here.

I had to dig into the second part of the statement a bit more. Single family residences definitely make up the majority of the house you can see in the map. The City of London provides a number of legacy planning documents, and I found the Uplands Community Plan (PDF) from 1996. The city’s Vision London plan from 1993 seems very similar to The London Plan.

Similar to the discussion in the preceding section about low density, the amount of land proposed to be designated for medium density residential development within the new area of development for the Uplands Community Planning Area is for approximately 40 per cent of the dwelling units. The Vision London land requirements analysis assumed that plans for new communities would provide a mix of housing types and affordability and that the mix would generally be in the form of: 60 per cent singles or semi-detached; 15 per cent rowhousing; and, 25 per apartments. Although the Uplands Community Plan is not proposing any high density residential areas, the 40 per cent of the units in the medium density designation provides for the mix of housing types and affordability.

The document goes on to state that planning staff recommended a density target of 30 uph or units per hectare. I found this illustration (PDF) from UBC helpful.

For about a year, I lived just a bit East in a neighbourhood called Stoney Creek. North-East of these neighbourhoods is farmland and golf courses. There are pretty decent amenities in the area. The Stoney Creek YMCA is impressive and includes a library branch. It is surrounded by farms and growing suburbs, a sign that more growth is to come.

Here is picture of where London was a few years ago, as reported in the 2011 census. London is pretty much on par with the rest of the province for the types of dwellings. We have a larger percentage of one-person households at 29%. 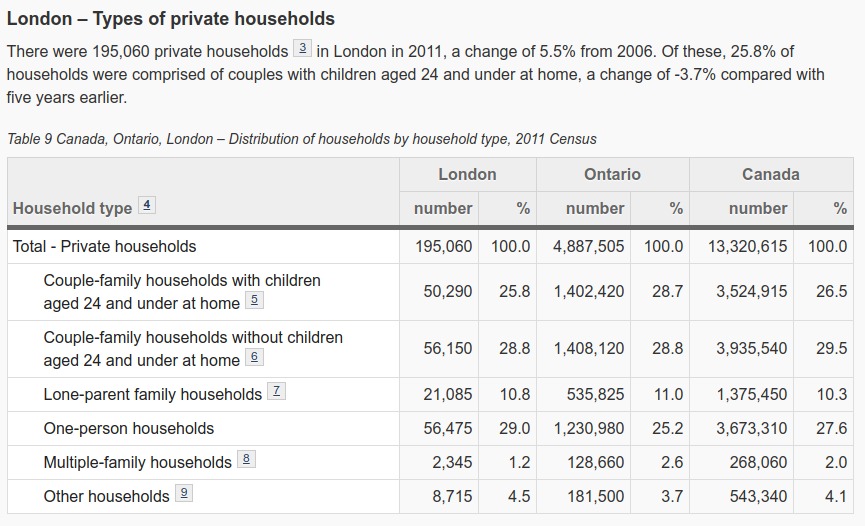 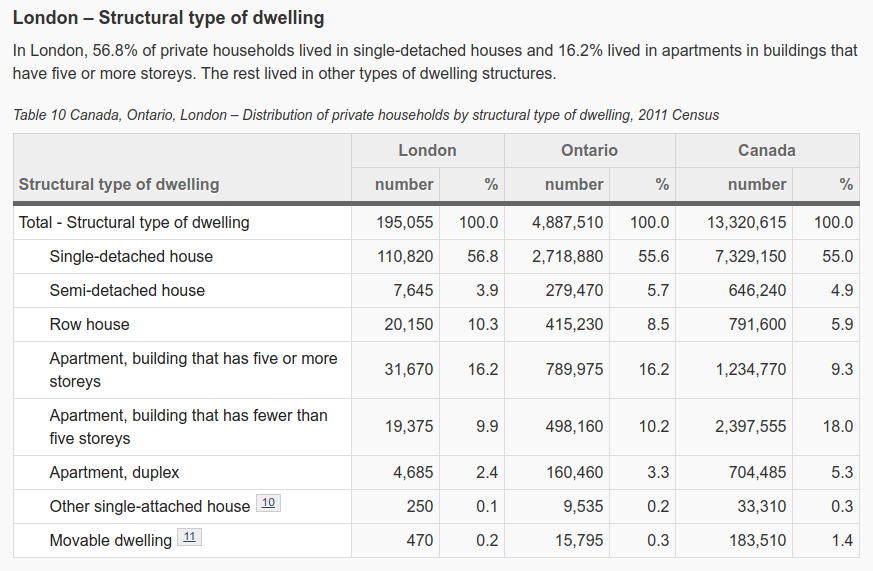 The Other Rental Market

Short term rentals like Airbnb (shown below, prices as of May 19, 2017) are having an effect on both the rental and housing markets. These unregulated rentals are being looked into by the city to further examine their impact and consider regulations. If the $500+ home on the North-East end isn’t to your liking, check out the highly gentrified Wortley Village. 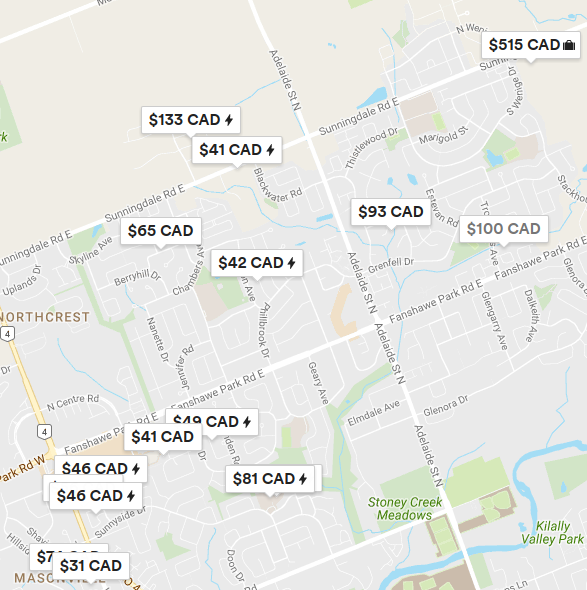 A few weeks ago in Toronto, the Friends of Kensington Market organized a mock-funeral procession titled “Requiem for Rental Housing”. Many residents are being “renovicted” from their homes and the neighbourhood is quickly losing the community that defined its character. As chair Dominique Russell states in the Toronto Star:

A year ago, this “Airbnb-ready” home was listed for a mere $1.4 million. You won’t find a deal like that now. Simply finding a place to rent in Toronto has become a soul-destroying ordeal.

Londoners of the sort who oppose intensification often state that London isn’t Toronto. That’s absolutely true. London doesn’t have nearly as much to offer newcomers and recent graduates in terms of entertainment, consumerism, collaboration or excitement. For many who move to London, the primary appeal is a better quality of life than Toronto, and that is quickly slipping away.

Most city councilors are heading toward intensification, albeit much too slowly. Last year, the City of London produced a poverty action plan titled London For All (PDF). This was largely a reiteration of poverty action documents dating back decades. The document admits to being ambitious but that means little if it isn’t honest. Londoner and researcher James Shelley lays out a summary timeline demonstrating decades of promises and very limited progress.

The recent decision to overhaul the Ontario Municipal Board has the potential to speed up building approval while respecting established conservation and heritage guidelines. In theory, this should remove impediments to apartment construction. The question is whether council will continue forward with housing intensification or allow the Luddites to smash London’s economic machine.

Cashier Jobs Are Checking Out